A city between two rivers: Koblenz. 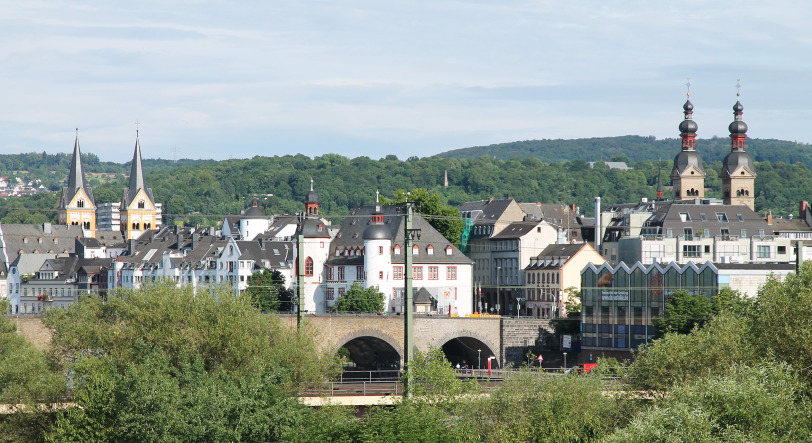 If there is one thing you can learn from visiting cities, it is the following: most big cities are located either close to the coast or alongside a river. In both cases, they are ideally located for any form of transport, whether it is for importing all kinds of necessities, trade or movement of troops. Consequently, the confluence of two major rivers must simply be the ideal spot to build yourself a city. And that’s exactly what the Romans thought when they arrived at the meeting point of the Rhine and Moselle rivers during their conquest of Germania.

Julius Caesar was the first Roman commander to visit this area (55 BC). He built a non-permanent bridge over the Rhine just west of Koblenz, close to Andernach (I found an interesting description of the construction of this bridge on this history blog). Around 8-9 BC, the commander Nero Claudius Drusus Germanicus (father of emperor Claudius) built a military post here: Castellum apud Confluentes (“the castle at the confluence of the rivers”).

But let’s get back to the present. We visited Koblenz in summer, and although the weather was rather humid and grey that week, our day in Koblenz was a warm and sunny one.

As we traveled with 3 kids, including a 10-month old, we only arrived in the afternoon. Although the city’s historic centre (Altstadt) has quite some parking spaces, those were obviously all occupied when we arrived. So we parked on the other side of the Moselle and crossed the river via the Europabrücke. Once on the other side of the river, we were already close to the Altstadt.

We proceeded towards the Am Plan square. We passed the beautifully ornated Four Towers (17th century houses) at the intersection of the LöhrstraBe and the Altengraben. 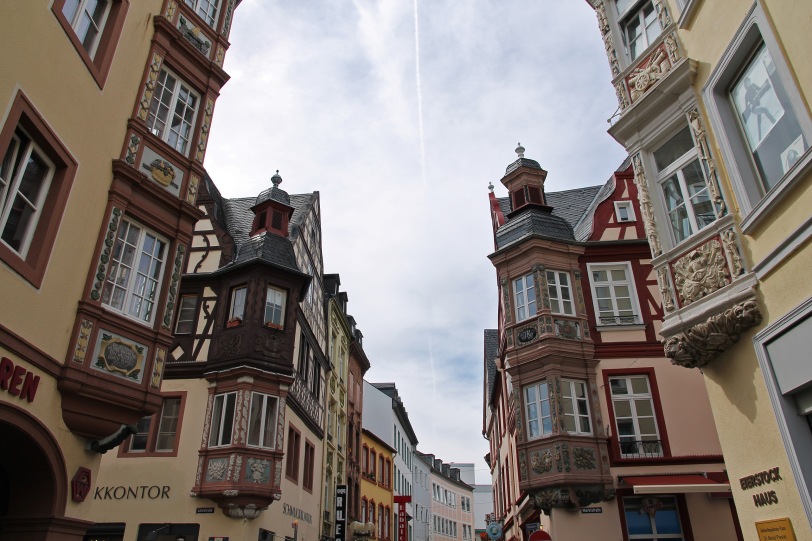 One of the 17th century corner buildings. 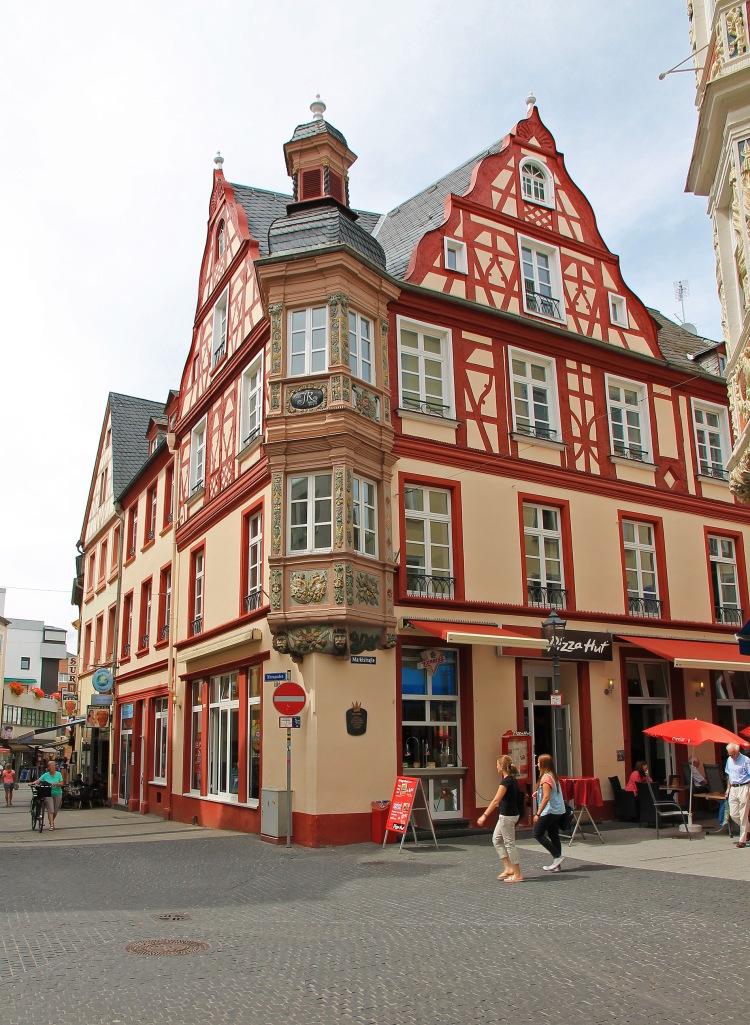 On the Am Plan square, we found an Italian-style ice cream parlor that served the most unexpected icecream creations:

From this square, you also have a nice view on the Liebfrauenkirche.

Am Plan and the towers of the Liebfrauenkirche.

After the ice cream frenzy, we headed to the cosy Münzplatz, where we saw one of the two Augenroller (eye-roller), and further on to the 13th century romanesque castle (Alte Burg), which nowadays houses the city archive. The building is surrounded by a moat and circular wall. 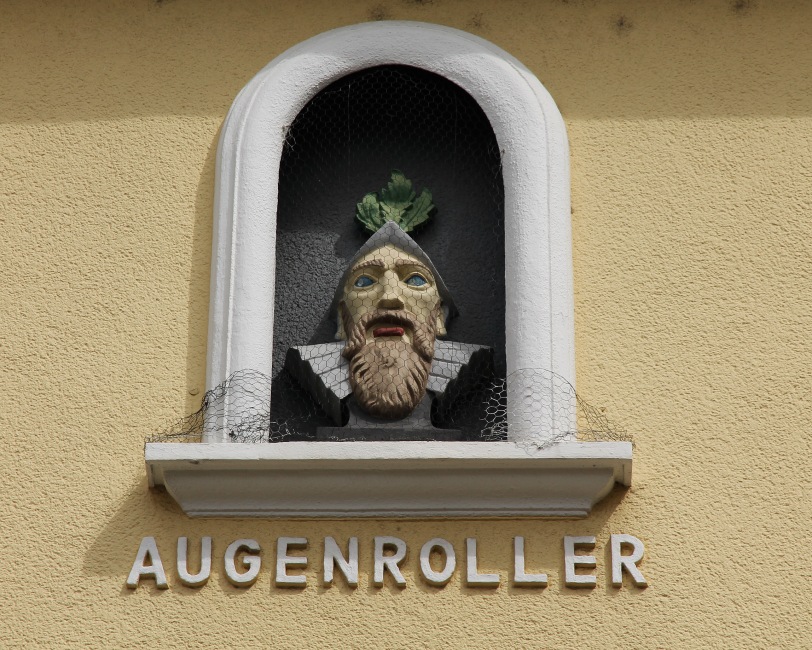 The Augenroller at Münzplatz. Unfortunately, he didn’t roll his eyes. 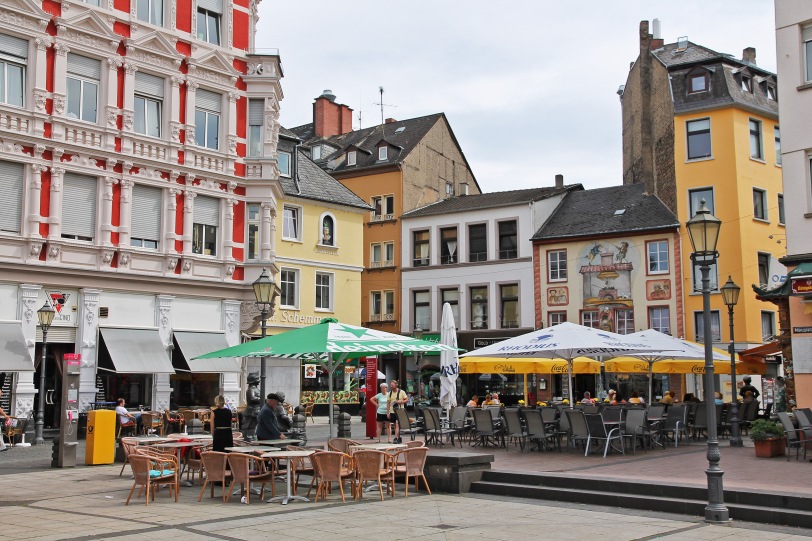 Next stop: Florinsmarkt. Here, we came accross the other Augenroller (and this one actually worked: it rolled its eyes with the rhythm of the clock!), above the entrance of the 15th century Altes Kaufhaus (shop- and dancehouse). The other eyecatcher here is the yellow, protestant Florinskirche church. 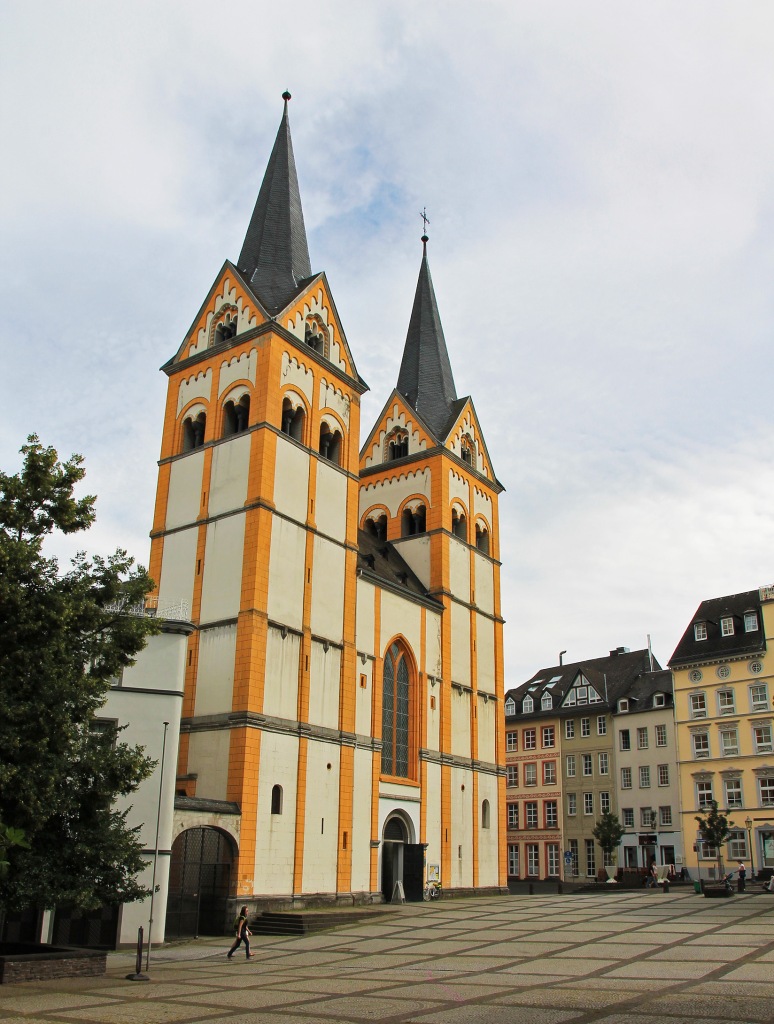 The main attraction of Koblenz, however, is the Deutsches Eck: the “German corner”. This is the spot where Moselle and Rhine merge with eachother. Its main attraction is the huge statue of the German emperor Wilhelm I. 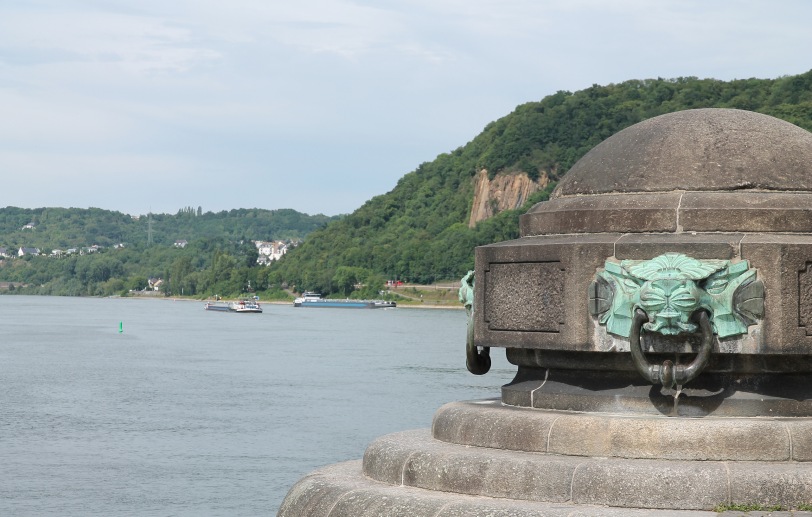 Confluence of Rhine and Moselle.

The giant equestrian statue of Wilhelm I.

Here, we had a great view over the Rhine, the Moselle and the fortress Ehrenbreitstein on the other side of the Rhine. This 19th-century fortress is accessible via the Seilbahn: a temporary, 900m-long aerial cable car which was supposed to be dismantled in 2013 (but evidently that hasn’t happened yet). The reason for removing the cable car is its interference with the UNESCO world heritage site of the “Upper Middle Rhine Valley“, of which Koblenz and Ehrenbreitstein are an essential part.

The Seilbahn and the fortress Ehrenbreitstein (on the top).

From the Deutsches Eck, it’s only a 5 minutes walk to the romanesque basilica of St. Castor. Built in the 9th century, it’s Koblenz’s oldest church. Its small garden makes a walk around the church quite enjoyable, although it also has the Seilbahn station in its backyard.

Basilica, as seen from behind.

After my visit to the church I joined my family and friends at a water playground close to the Deutsches Eck. Obviously, this was Febe’s favourite stop of the day… 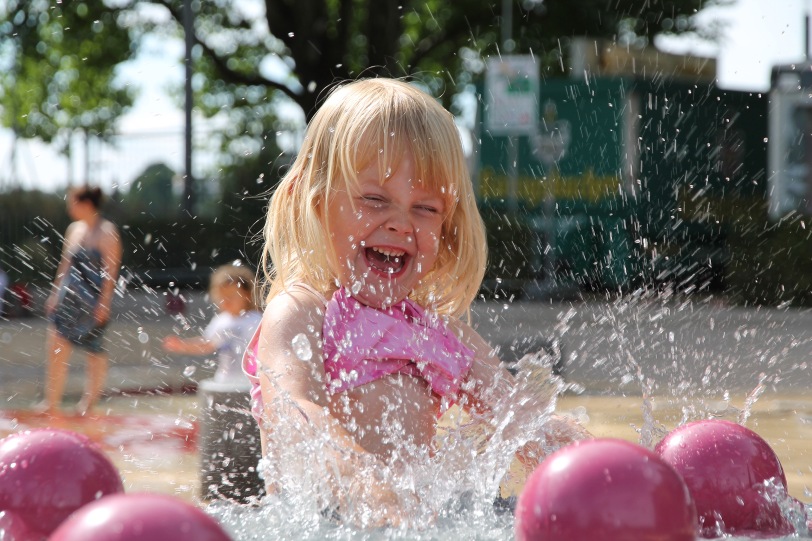 I can only conclude that Koblenz makes for a perfect afternoon visit, making both the parents and the children happy. Of course, there are ample options for making it a daytrip, e.g. visiting the fortress Ehrenbreitstein, the Electoral Palace, the Liebfrauenkirche… You could as well have a stroll along the Rhine or Moselle or take Koblenz as a starting point to discover the Romantic Rhine by car… 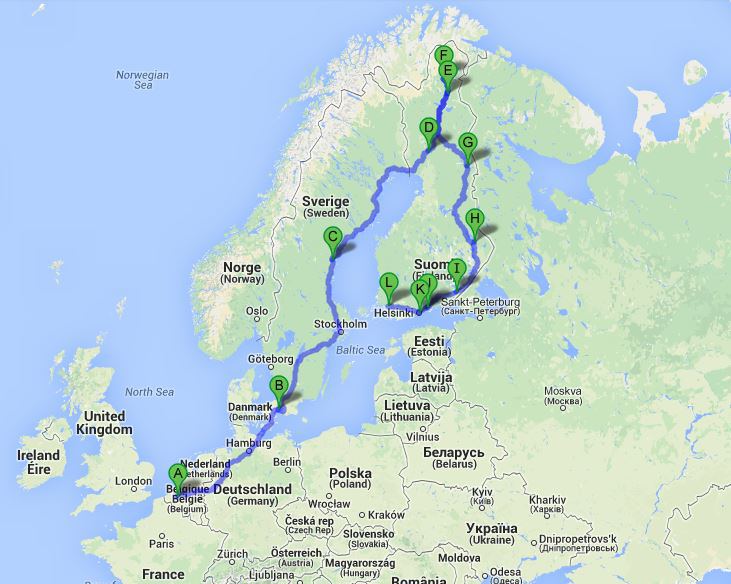 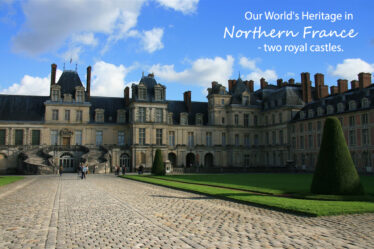 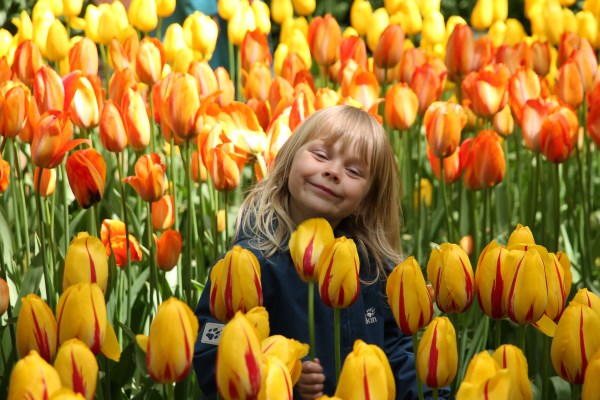